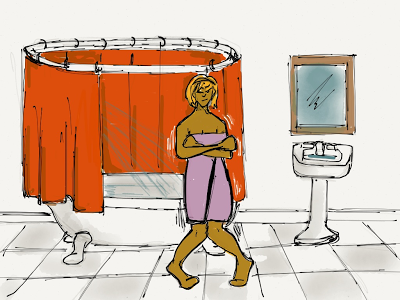 I recently had a friend ask me about adjusting the upper limits of the temperature in his shower.  His basement had been recently finished and the shower temperature was not as warm as he would have preferred it.  Sometimes this is an issue of actual water heater temperature, but in many newer houses it is not.
Sometime in the mid 90's, laws went into effect that required shower valves to include an anti scald device.  This means that the temperature of the water is now limited by the mixing valve.  So, if your shower won't get hot enough you need to adjust the internal  temperature settings.  This is also the same way you turn down the temperature if it's too hot.
I thought about walking through the adjustment on my own shower, but this video already does a great job.

Most newer single handle showers are going to be very similar to what is covered in this video.  Most have adjustment marks and many can be done without removing the valve.
NOTE:  Make sure not to remove the screws that hold the valve housing in place while the water pressure is still turned on.  If you are unsure of exactly what this means, just make sure to turn off the water to your house and drain down the pressure by turning on a sink before you begin.  These valves will shoot out like a rocket if you try to remove it with the pressure on.
Thanks to the guys and gals at Gilbert plumbing for the video.
They have more at their website - Gilbert Plumbing
Posted by Unknown at 1:57 AM